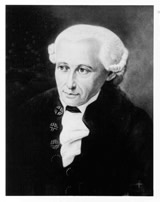 Immanuel Kant was one of the greatest philosophers of all time, and had more influence on other renounced thinkers than any other philosopher of the 18th century. He was inspired by his study of Hume’s writings, especially Hume’s psychological analysis of causality. One of his greatest contributions to philosophy was the merging of rationalism and empiricism.

[Kant] argued that the mind brings to experience certain qualities of its own that order it. These are the twelve a priori [deductive] categories of causality, unity, totality, and the like, and the a priori intuitions of time and space. While the mind has no substance, it is an active process that serves to convert raw sensory data into meaningful, ordered experiences. Kant names the process apperception. Things in themselves cannot be known, we perceive the world only the way our mind makes us do it, i.e., through the instrumentality of the innate mental categories. Kant thus accepted the notion of mental facilities–cognition, feeling, desire understanding, judgement, and reason. . . . (Zusne, p. 55)

Kant considered psychology to be an empirical inquiry into the laws of mental operations. He believed that mental operations lack substance, only a time dimension, and therefore cannot be assessed. Because of this, he considered it impossible for psychology to be an experimental science. Kant’s authoritative opinion retarded the development of psychology as an experimental science. “On the other hand, his statement that mathematics is a source of scientific knowledge (because it is based on a priori axioms), and is the basic to all science (Zusne, p. 55)” led to the inclusion of mathematics in psychology in its infancy.